Meeting Thean Vuthy, the self-proclaimed final Buddha who left the spotlight behind – but not controversy 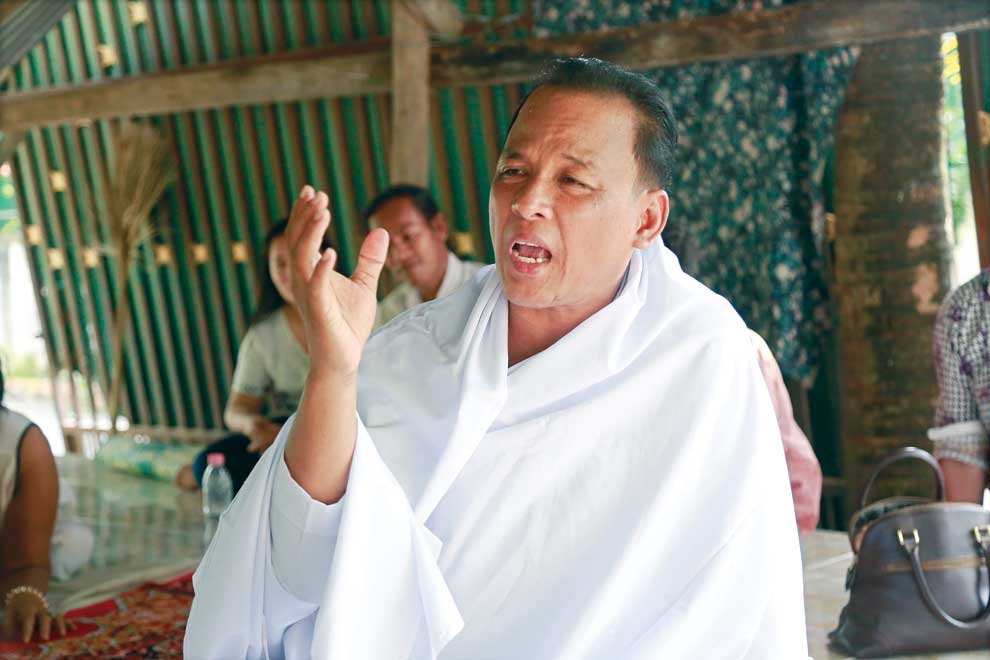 Several weeks ago, a video emerged on Facebook and local media of a man declaring himself the “Father of the Universe” and an anarhat – or “perfect person” in Sanskrit. Around him were pictures of the late King Norodom Sihanouk and King Suramarit, as well as a legion of faithful worshipers.

The video sparked an outcry from the public, especially since the man was putting himself on par, and even above, the monarchy, with one social media denizen declaring: “This fool has to be arrested and put in jail.”

Word spread on local media that the man in question was Thean Vuthy, who for years promoted himself as the Maitreya, or the next and final Buddha – a messiah-like figure who it is predicted will achieve complete enlightenment and teach the pure dharma.

In response, the Ministry of Cult and Religion paid Vuthy a visit last Thursday in Champa village, in Prey Kabbas district, but he denied that it was him in the video, and indeed there was little resemblance between him and the man depicted. Nonetheless, controversy surrounding Vuthy remains. It is not new, either, as the “holy man” has been on the government’s radar for years.

In 2014, Prime Minister Hun Sen demanded the arrest of Vuthy after the the Ministry of Cult and Religion accused him of “seriously offending the values of our state religion”. The problem seemed to be pictures that showed Buddhist monks bowing to the ground in reverence. 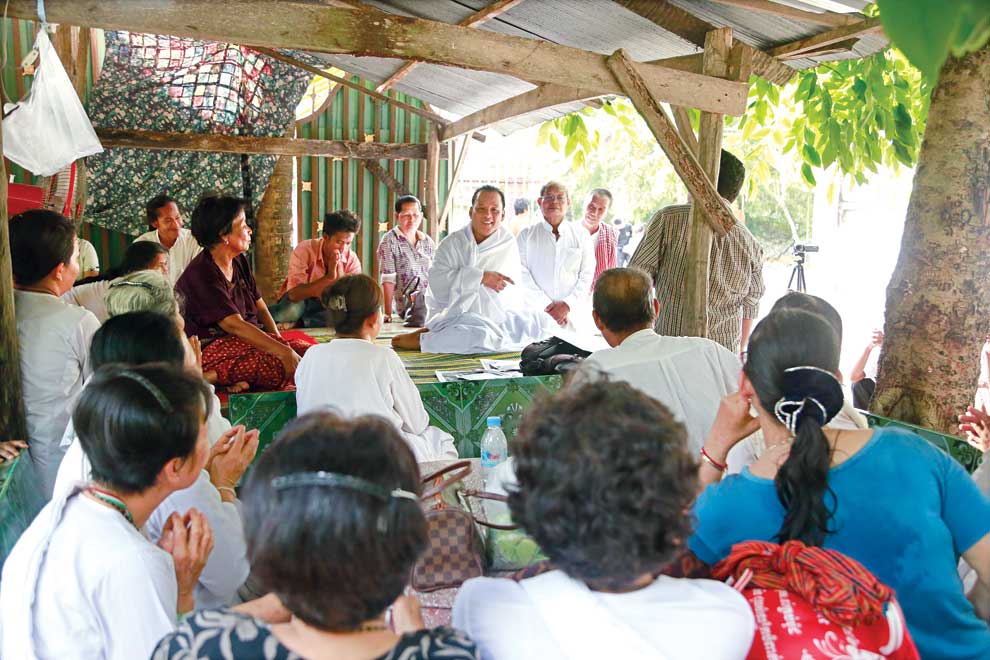 Nevertheless, it was not clear on what charges he could be brought before a court.

A few months earlier, authorities had seized promotional items touting his greatness from the Tuol Reachea pagoda in Kandal province, where he was based, such as photos and CDs. In one of the photos, he is wearing a white monk’s robe while sitting on a photoshopped pink lotus. Many “irregular” items were also found, such as elephant tusks and tiger fangs, as well as a large cache of jewellery.

Three days after Hun Sen’s angry statement, the famous “fake” Buddha publicly apologised, and confessed to violating the constitution by offending Buddhist values. He added that he had only helped people “escape their depression” by performing water blessings and telling their fortunes. Before the governor of Kandal, he thumbprinted a document banning him from the pagoda.

He then faded from public view and left for his hometown in Takeo province. He didn’t leave behind his unusual religious beliefs, however, and out of public view, his followers remained.

Following ‘Lord Father’
At his home last week, Vuthy, now 42, was dressed in his signature white robe and sitting on a bamboo bed in his backyard. Dozens of followers, also dressed in white, surrounded him.

Some of them addressed him as preah ang, a title for monks and royal family members, while the others call him lok ov, which means “lord father”.

In an exclusive interview with The Post, Vuthy said his experience in 2013 had made him “fed up with the humans’ world”, and that his actions at Tuol Reachea pagoda were misinterpreted.

In his 20s, he said, he went to Tuol Reachea pagoda to “meditate and study dharma to seek awakening”. He first gained notoriety, he said, when he treated a mentally ill patient with a holy water blessing with the help of a mystery spirit sometime in the 2000s.

“I follow Buddhism and all other religions, including Hinduism, Christianity and Islam,” Vuthy said. “All religions are good . . . because they forbid people from doing bad things, such as harming others.”

His faith is as undefined as it is pantheistic, and includes certain inconsistencies, such as the fact that he eats pork, an act forbidden by Islamic rules, and also eats in the evening, which strict followers of Buddhism cannot do.

During the interview, Vuthy avoided most questions about his early life, only saying that his mother taught him to behave well as a child. But Erik Davis – an associate professor of religious study at Macalester College in the US, who interviewed the white-robed guru several times – said Vuthy had told him the story of his childhood.

“Please believe our Lord Father. He is the true lord, and teaches the right way to the people”

“The story he was telling at that time is that as a young child fleeing the Vietnamese liberation/invasion of Cambodia in 1979, he fled to the mountains, where he was raised and educated by a hidden sage who lived deep in a mountain,” Davis said in a previous email.

Vuthy told him that when he left the mountain, he obtained extensive memory of his past lives, which included that of one of the most significant figures in modern Cambodian history: the Venerable Chuon Nath, national patriarch and the father of the modern Khmer language.

This week, Davis added that Vuthy’s claim of following all religions is not uncommon among fringe religious figures. Cao Dai, a Vietnam-based hybrid of multiple belief systems, including Christianity, Islam, Buddhism, Taoism and Confucianism, is based on a similar concept.

Vuthy still has a few hundred followers nowadays. Among them is 60-year-old Van Thorn from Takhmao town, who said his blessing gives her and her family good luck. She goes to him when sick for his miracles and traditional medicine.

“Preah Ang is so great that many people are jealous of him,” she said. “They invent things to harm him.”

Keo Neang, 64, called those who are against her guru meali, or enemies of the Buddha.

“Please believe our Lord Father,” Neang said. “He is the true lord, and teaches the right way to the people. His voice is so beautiful, and we always want to listen to him speaking.”

His followers say Vuthy can communicate with animals, a skill he declined to describe, reasoning that it is “too complicated to understand”.

While word spread over the years about him, attracting followers, many in his hometown are sceptical.

Chan Chin, a 72-year-old retiree who has known Vuthy since he was a child, said all his followers are from elsewhere. Their scepticism seems to stem not from his quirky beliefs but because he doesn’t follow decorum.

“Who could believe someone like that?” she said, pointing out that he married after supposedly becoming a hermit. “He even has children.” 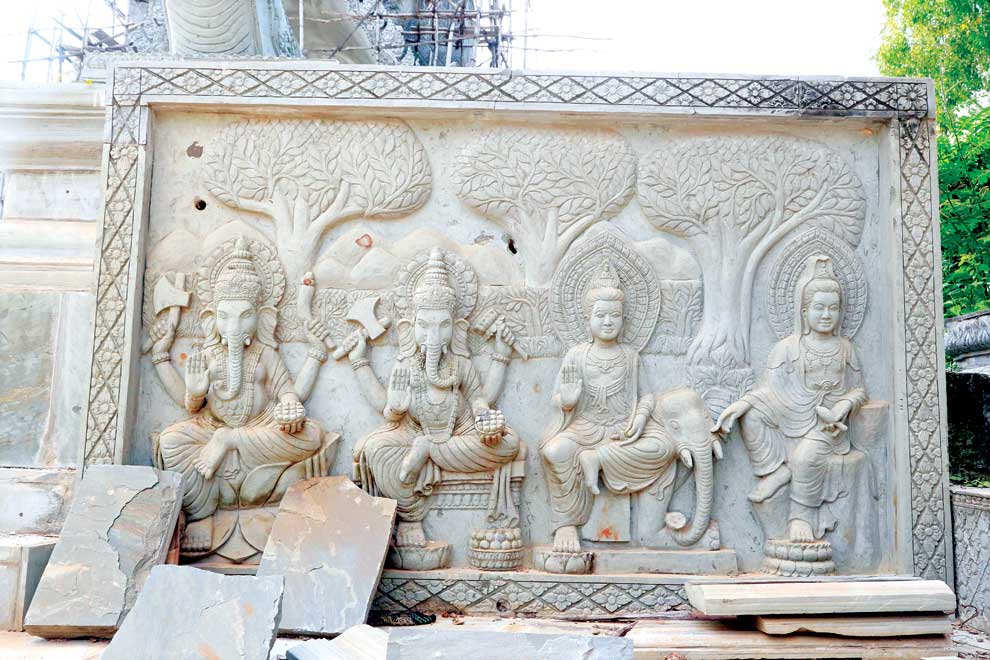 A bas-relief at the gate of Vuthy’s temple depicting images of Ganesha (two figures on the left), and Guan Yin, a Chinese goddess. Heng Chivoan

Mok Herm, a 75-year-old retired farmer, called Vuthy a fraud looking for money. He alleged that Vuthy had claimed he found a sacred Buddha statue in the ground after burying it himself. “I also heard that he charged $5,000 for one night of giving a sermon although he is not a monk.”

Vuthy, however, dismissed these claims, saying that he accepts gifts but does not charge a specific price. He also said he is not a monk, meaning rules about celibacy don’t apply, but he can nonetheless still achieve enlightenment.

“My mother asked me to get married in 2005, and I have four children now. What is strange about it?” he said. “And people can say anything they want about me.”

Some accusations against him are harder to refute, however. Recent video taken during the ministry’s visit shows Vuthy handing money to officials, and he also offered cash to Post reporters during an interview. Seng Somony, spokesman with the Religion Ministry, said the incident is being investigated.

“If it is true, those officials will have to face the legal consequences,” he said. “However, we are waiting for the report about this case.”

A ‘gate to heaven’
Over the years, Vuthy has left a trail of extravagant religious designs behind him. At Tuol Reachea, he used money donated by his followers all over the country and from abroad to commission a statue of the Buddha, with the six-headed Naga behind him, towering over the vihear, the compound’s central building.

Near his house a temple is being built on about 10 hectares of land also belonging to him. It features a massive statue of Maitreya and of gods from different religions.

Vuthy said it was his mother, Leng Sam Ol, who built the structure, with money donated by his followers.

He calls this place the “gate to heaven”, where people get closer to gods and angels, but refuses to say more about it. His mother, meanwhile, called it simply “my family mansion”, and declined to comment further. 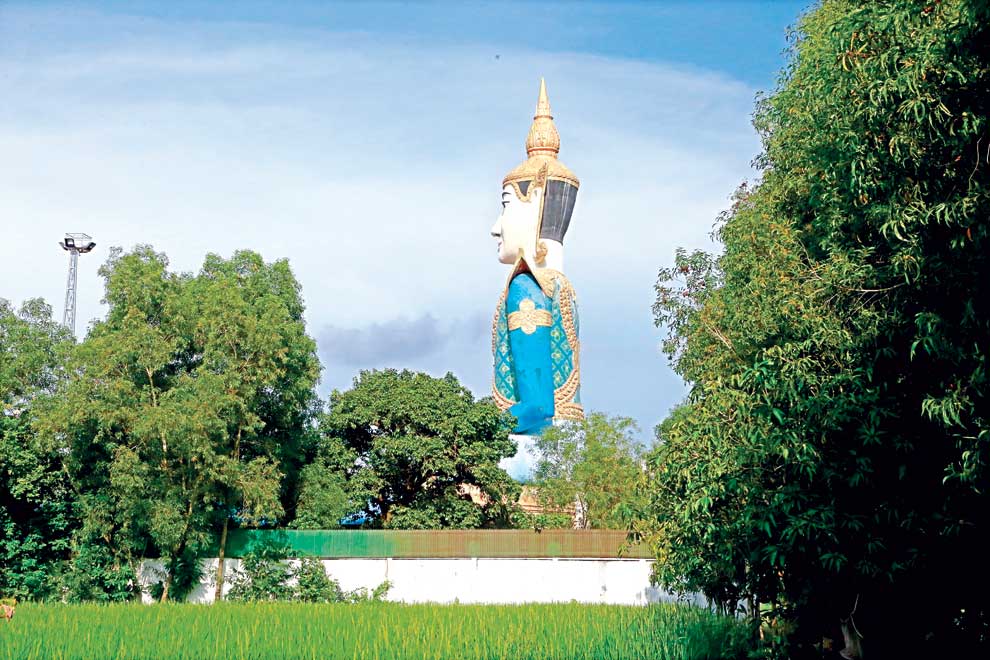 A 20-metre-tall statue of the Maitreya in the compound of Vuthy’s temple in Takeo province. Heng Chivoan

Seng Somony, the spokesperson of the Ministry of Cult and Religion, said despite his controversial history, Vuthy doesn’t appear to be violating the law.

“Our citizens have the right to follow any religion or create a religion, as long as it does not have an impact on social stability and security,” he said.

Dr Heng Monychenda, the founding director of NGO Buddhism for Social Development and an expert in Buddhism, accused Vuthy of violating the “intellectual property” of Buddhism.

“Following all religions is practically impossible,” he said. “As I noticed, Thean Vuthy based his doctrine on Buddhism, but changes it following his own thinking.”

If he wants to create a cult, he said, Vuthy should at least come up with his own concepts and theories.

“Many fake saints can cheat people because of their charisma and cleverness,” Monychenda said. “Meanwhile the lack of education and confidence push people to rely on the unseeable.”