An intimate look at life behind the scenes at the Royal Palace in the early 20th century, Saramani: Danseuse Khmer has been pored over by historians. New details are emerging about the protagonist, and about the man who portrayed her 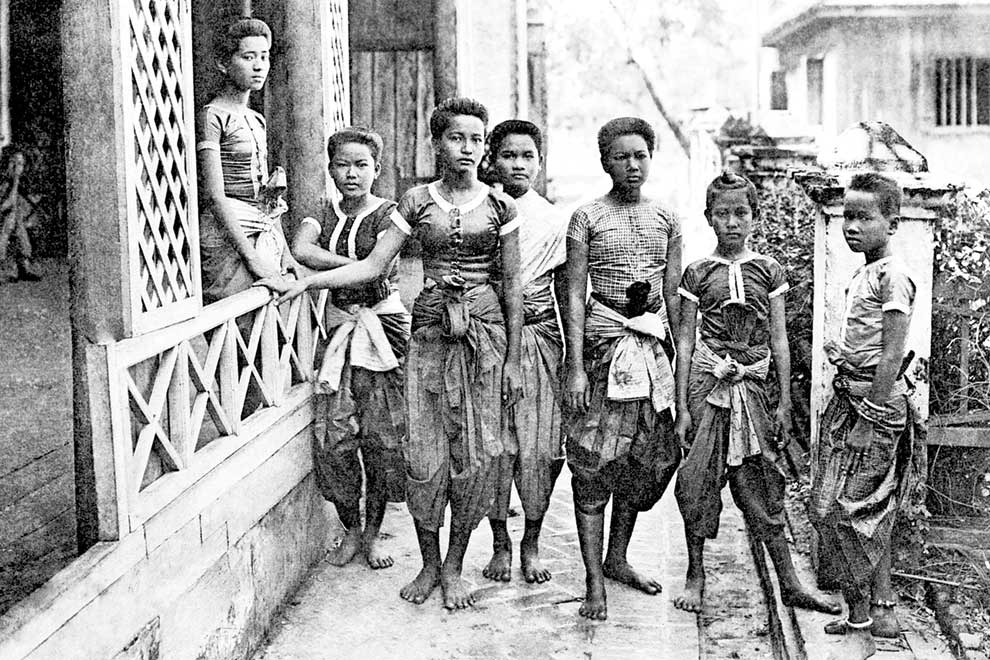 A group of dancers, including Saramani (far left), from the Royal Ballet in 1908. Supplied/Meyer Family Archive

In February of 1904, after 43 years on the throne, Cambodia’s first King Norodom was celebrating his 70th – and, unexpectedly, last – birthday at the Royal Palace. To mark the auspicious occasion, a huge stage was erected outside, offering the public a rare opportunity to see a performance by the Royal Ballet.

It would be just the second time that a 13-year-old servant and royal dancer named Saramani performed before a large crowd, but she wasn’t nervous. When the music began, she was the first to emerge, dancing with an elegance and grace that belied her reputation around the palace as a stubborn troublemaker.

But despite Saramani’s obvious talent, during her four years serving the royal family, she had proven herself quick to pick a fight, she broke rules and she dissatisfied her superiors. These traits, and her refusal to flatter the necessary palace familiars, she would later say, were responsible for her being passed over to become the ballet’s lead dancer.

She would go on to leave the palace, and shortly thereafter, marry a Frenchman.

Or so the story goes in Saramani: Danseuse Khmer (or “Khmer Dancer” in French), a novel published in 1919 by Roland Meyer, a French civil official working in the Cambodian protectorate. In the book, Saramani tells her husband four years into their marriage: “I realised clearly . . . my dream of becoming a well-known dancer one day in the future was gone for good”. 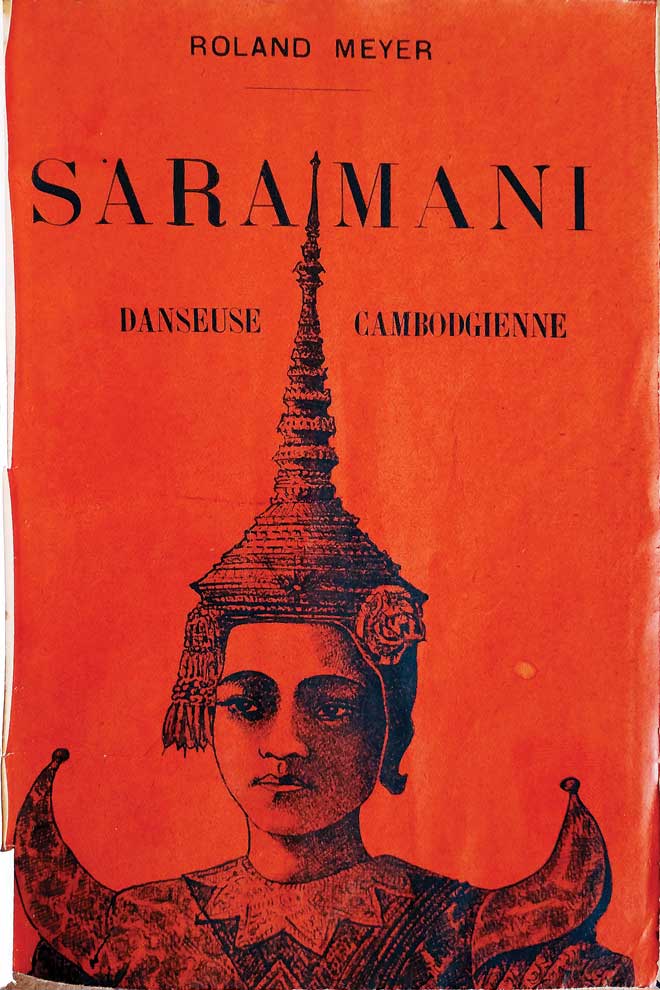 “In the last two years of living in the Royal Palace, I faced only disappointments.”

For nearly a century since its publication, the novel has been viewed as a historically accurate, if fictional, depiction of this period in Cambodian history, and a unique window into the palace intrigue of the day.

However, there is an increasing body of evidence – including a recently discovered birth certificate and photographs – indicating that Meyer’s novel may be more grounded in fact than previously known.

The book provides a vivid account of the dancer’s relationships with a host of historical figures. Such detail would have been difficult for Meyer, despite his fluency in Khmer and knowledge of the country, to have concocted.

But some questions over the book still preoccupy historians: namely what was the author’s relationship to Saramani? If she were real, how could he have been privy to such intimate moments in her life?

And then, more vexingly, there is the question of the identity of the dancer’s French husband, identified only as “Komlah”, or bachelor – as well as that of Saramani herself.

On the trail of Saramani

In 2005, when Kent Davis, the publisher, editor, author and translator for DatAsia Press, entered Angkor Wat for the first time, he was amazed by the sculptures of the dancing devatas, or apsara, which seemed to be calling out to him to explore the mysteries and the “glory of the Khmer Empire”.

It wasn’t long before he encountered Saramani.

“My true role is as a ‘literary archaeologist’,” Davis said. “As my job description implies, I seek out obscure, lost and forgotten texts about Southeast Asia and restore them into new expanded editions in English and French.”

Since 2007, Davis has been translating the book into English, such a “huge undertaking” that it’s still in progress. The book has been the subject of many articles and essays by Davis. In one 2010 article, called Roland Meyer, Saramani and a Cambodian Love Affair, he questioned whether she was a fictional character or a real person, and whether the events in the book are based on “reality or imagination”.

Meyer was well positioned to write authoritatively on the palace and on Cambodia. He was born in Moscow in 1889, and after moving to Paris signed up for the Indochinese colonial service at the age of 19. He was an aid to the governor-general of Saigon before moving to Cambodia in 1908.

A group of French colonial officers in 1912, including Meyer (second from left in the back row). Supplied/Meyer Family Archive

His work meant that he often came and went from the palace, and his final position was as director of the Ecole des Beaux Arts before eventually being transferred to Laos in 1919, the same year the book was released. His later life, including his death, remains unknown, leaving few clues as to the inspiration of his work.

In 2013, however, Davis got a break in the form of an email from Jean Courtois, a Frenchman and retired air force officer. Jean told Davis that he was the grandson of Meyer and his Cambodian wife – a former dancer with the Royal Ballet named Saramani.

Courtois, now 69 years old and living in Nantes in western France, said this week that he was the son of Marcelle “Evelyne” Meyer, the youngest daughter of the couple’s four children, and Louis Courtois, a French administrator in Indochina. On his mother’s birth certificate, which he supplied to Post Weekend, the names of her parents are written: Roland and Saramani.

“I don’t know much about my grandparents, but I remember seeing my grandmother as a [Buddhist] nun in Wat Piphort Reangsey,” he said, referring to a pagoda in front of the Courtois family home on what is now Street 80 in Phnom Penh.

According to the certificate, Saramani was born in 1893. She and Meyer were divorced in 1955. 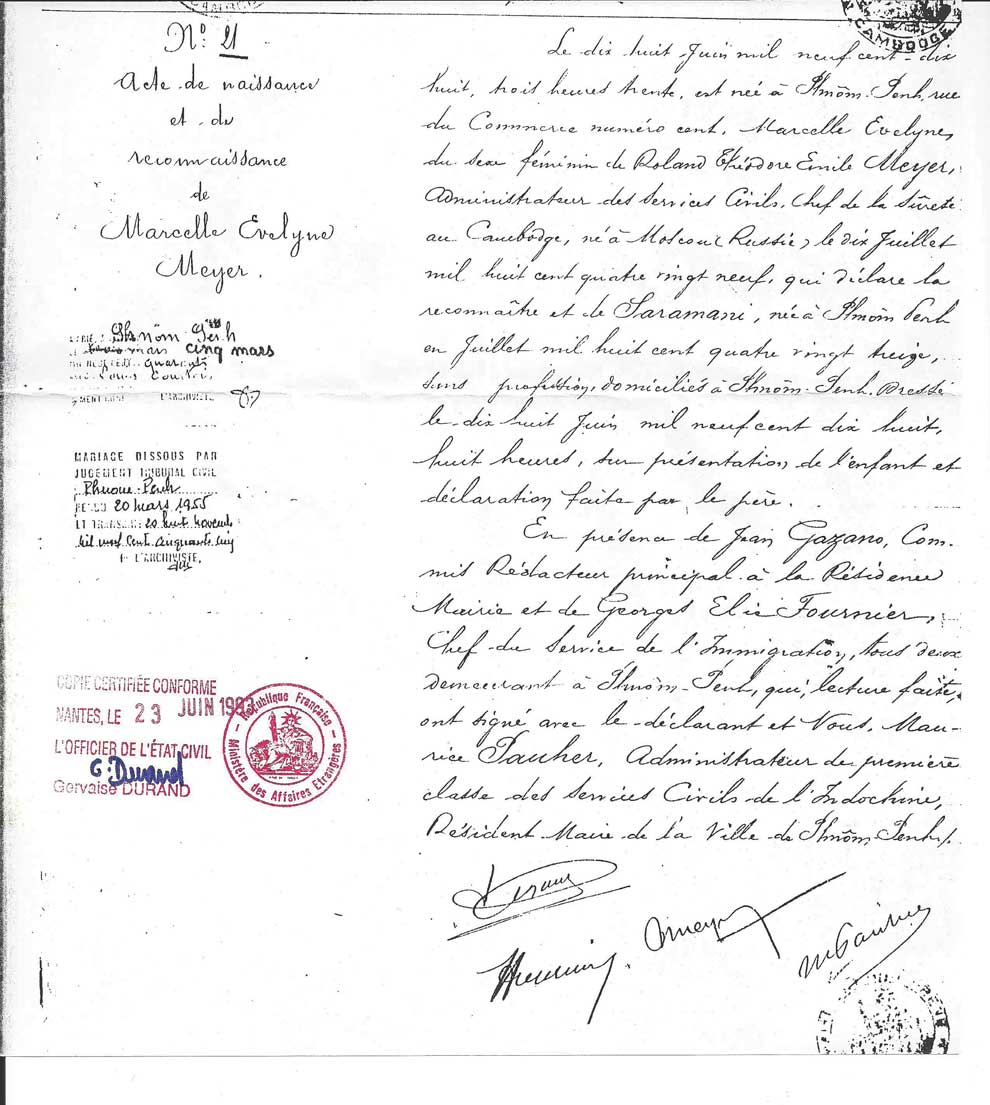 In 1954, after his parents were also divorced, Jean Courtois came to live in France with his father, Louis, while his mother chose to remain in Cambodia, near Saramani. Letters from his mother after he left show some of the hardships of life as war crept over the country.

“In her letters, my mother wrote that she wanted to live in Cambodia, near her mother, although life was not comfortable there due to the war and so on,” he said. “I lost contact with her in 1975, when the Khmer Rouge came into power.”

Later in life, Courtois read his grandfather’s book and became curious about his French-Cambodian family. Since his retirement in 2009, he and his wife have been researching Meyer, but haven’t been able to find out about his life after he served in Laos.

“I am proud of being in this family, of being the grandson of a great person, who contributed to Cambodian history,” Jean said. “I am proud to have Cambodian blood in my veins.”

Davis has speculated as to why Meyer was transferred from Cambodia, believing it to have been a reaction to the book. The depiction of scandals and embarrassing behaviour among members of the royal family – including portrayals of incest, lesbian relationships and bizarre behaviour by the King himself – may have been too much for the palace and for the French administration.

“Its unflattering descriptions of life inside the palace and in the French community immediately caused uproar,” Davis said. “I now view this as an early 20th century WikiLeaks.” 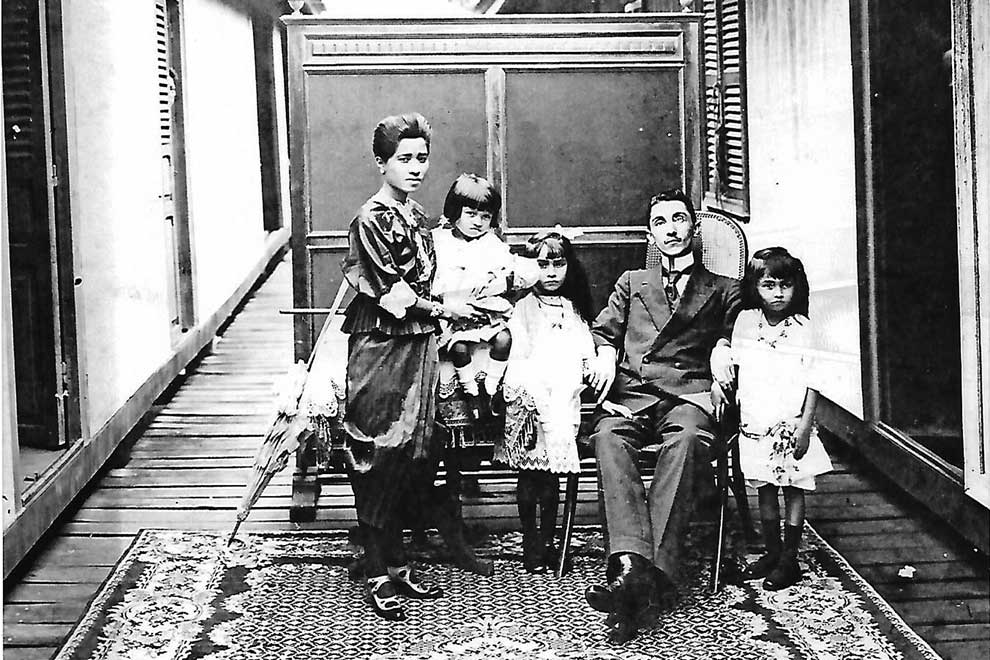 Saramani and Roland Meyer with their three daughters in 1918. Supplied/Meyer archive

Davis is not the only researcher chasing Saramani’s identity. Dr Chen Chanratana, a Cambodian historian and the founder of Khmer Heritage Foundation, encountered the novel during his research on Royal Ballet dancers who went on to become masters at the Royal University of Fine Art.

Like Davis, he was amazed by Meyer’s level of detail.

“Many events mentioned in the book are true events, with accurate dates, locations and procedures,” he said. “With Saramani being proved to be a real person, and Komlah representing Roland Meyer, it will strongly enhance the book’s reliability and importance as historical account.”

According to Chanratana, the book provides a rich description of life in colonial Cambodia, including that of farmers, fishermen, royal dancers, servants and the royal family, which all corroborate his past findings. It also provides an illustration of King Norodom’s funeral, and the coronation of King Sisowath.

There are also certain traditions explored through the character of Saramani that give insight into Khmer culture, including the worship of Neak Ta, or sacred spirits, and ceremonies like Chol Mlobb, a rite no longer practised in which a young woman remains locked in a room for months to be educated on how to be a proper woman.

Sin Samadeukcho, 77, a former dancer and servant in the Royal Palace, where her mother served as the dance master, says she recalls – and knew personally – many of the events and people in the book.

“I used to hear the name Saramani from my mother when I was a child,” she says. “But all I remember is that she was a dancer and servant in the Royal Palace.” 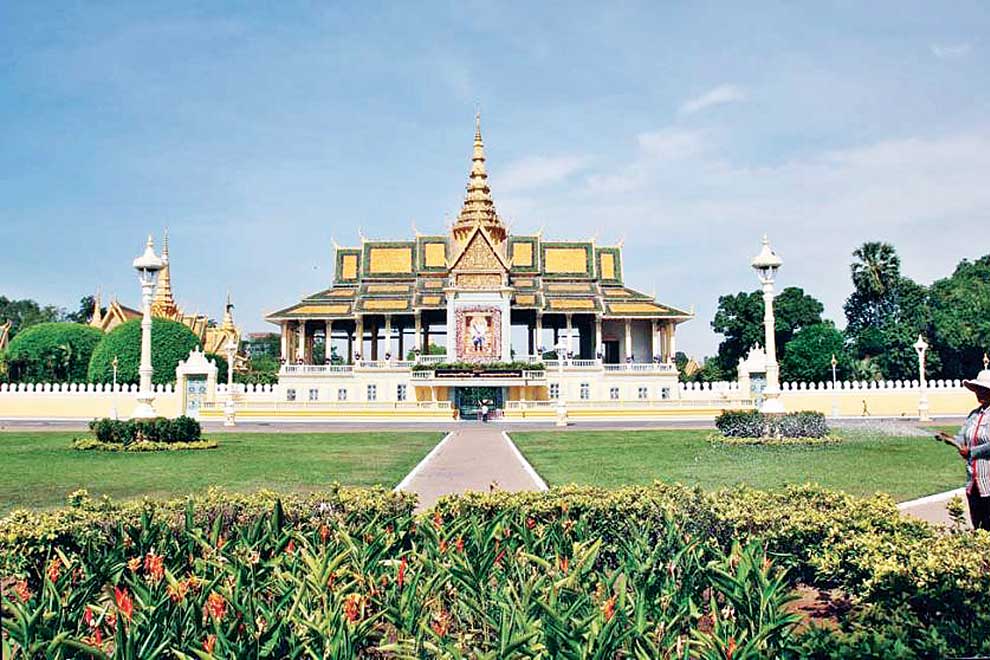 The Royal Palace, the setting for much of Meyer’s book, in Phnom Penh. Hong Menea

Much surrounding the book remains a mystery, including the accuracy of some of the more salacious details. Witnesses and records have been lost, and a constitutional provision mandating the “inviolability” of the king, means it is unlikely any scandals will be dug up.

Any information about the later life and death of Saramani and Meyer are also unlikely to be discovered in the near future. In the book, some of which is fictionalised, Saramani dies young from illness, while in real life she lived past World War II.

Despite a lack of information, Davis said Saramani opened all the doors to make it possible for Meyer to record this time in history.

“Throughout his life, Roland was a man whose jobs focused on recording details,” he said. “Through Saramani, her family, her neighbours and her friends, he was hearing news of Cambodian life directly from Cambodians every day.”

Meanwhile, Jean Courtois, the grandson, says he is committed to doing his best to find out more about his family. Currently, he is looking for people in Cambodia who knew his mother.

As for Chanratana, the search for clarity is nowhere near finished.

“I believe people really want to know about them,” Chanratana said. “I am not really a superstitious person, but if Saramani’s spirit really existed, I wish she would show us a miracle.”