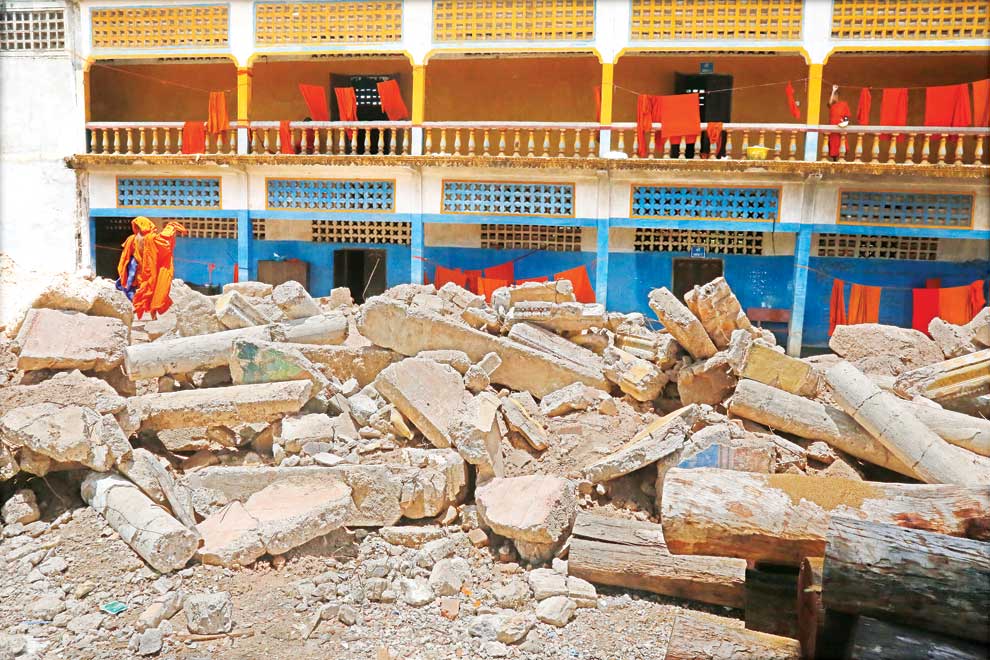 Amid a pile of debris at the Entri Sam Virak pagoda, the painted, smiling faces of the Buddha and a cohort of angels peer out.The mural is on a wall that was, until two weeks ago, part of a vihear – or monastic temple – cherished by historians and visitors, in part, for its unusual paintings.

Unlike many monastic temples in Cambodia, it survived the civil war and the Khmer Rouge’s atheistic destruction, only to be demolished last month on the orders of its abbot, Seang Sok, who did not ask for permission or inform local authorities.

About 20 metres from the debris, a group of workers were fixing into place a billboard showing the blueprints for a new 38-metre-tall temple, as a layperson nearby called for donations for the new religious sanctuary.

Built in 1948, Entri Sam Virak’s central structure was certainly not old by Cambodian standards, but historians recognised it for being representative of the architectural period under French protection leading up to the Sangkum era, and for its murals documenting the political climate of the period. In 2007, it was declared a national heritage site by the Ministry of Culture and Fine Arts. 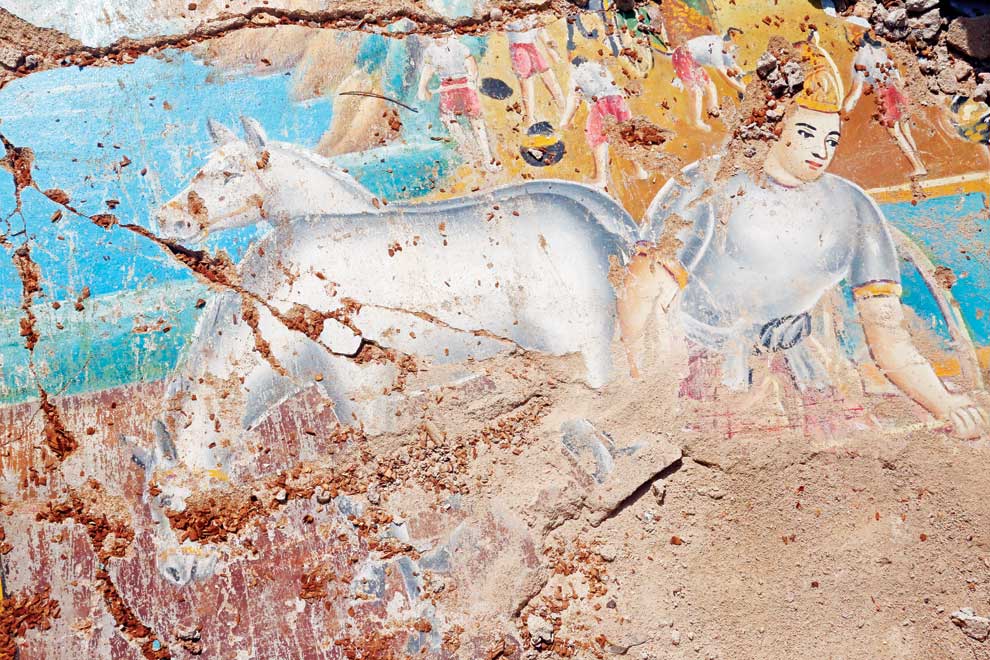 Remnants of a mural among the rubble of the vihear.Heng Chivoan

The news of its demolition went viral on Facebook and sparked an outpouring of criticism. Among the first to call attention to it was Minister of Information Khieu Kanharith, who commented on his Facebook account that the chief monk ordered the destruction “without any regret”, though the abbot has since issued a formal letter of apology. Many other users cursed Sok for not considering its value, while others blamed the authorities for their lack of oversight.

When the news reached Michel Tranet, an expert in Cambodian history and culture, as well as the former Deputy Minister of Culture and Fine Arts, he said he broke down in tears.

“It was terrible news,” Tranet said. “All my life, there is nothing I love more than Cambodian culture, and now an important part of it is gone forever.”

Locals, too, criticised the decision. Noun Nang, 73, a Kampong Thom native, said he had visited the temple since he was a child.

“I was born into a Buddhist family, and we usually came to this pagoda to pray and offer food to the monks. The temple gave me a perfect, peaceful atmosphere for meditation,” he said.

For Sam Bopha, a 54-year-old businesswoman, the temple was more than just culturally and historically important. It was the last place where she saw her father before he was killed by Khmer Rouge cadres in 1977. 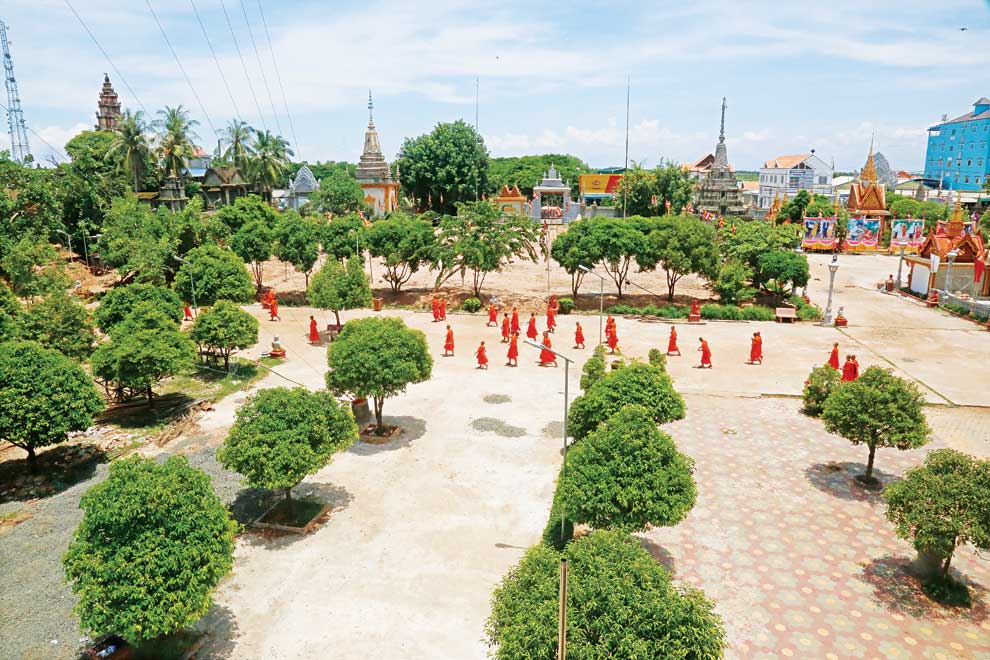 “My father was arrested and sent to that pagoda, which was used as a prison at that time,” she said. “I secretly followed him, and saw him being pushed by Pol Pot’s soldiers into the temple. The next day, he was no longer there.”

Painted politics
Tranet remembers visiting the temple as a young man and falling in love with its architecture and paintings.

“Apart from ancient temples, I love studying monastic temples because they describe Buddhism, a big part of Cambodian culture, in different stages of history,” he says.

According to him, the structure was “built to represent Khmer religion with influence from French architecture”, an aspect found especially in monastic temples constructed from the 1940s to the 1960s. 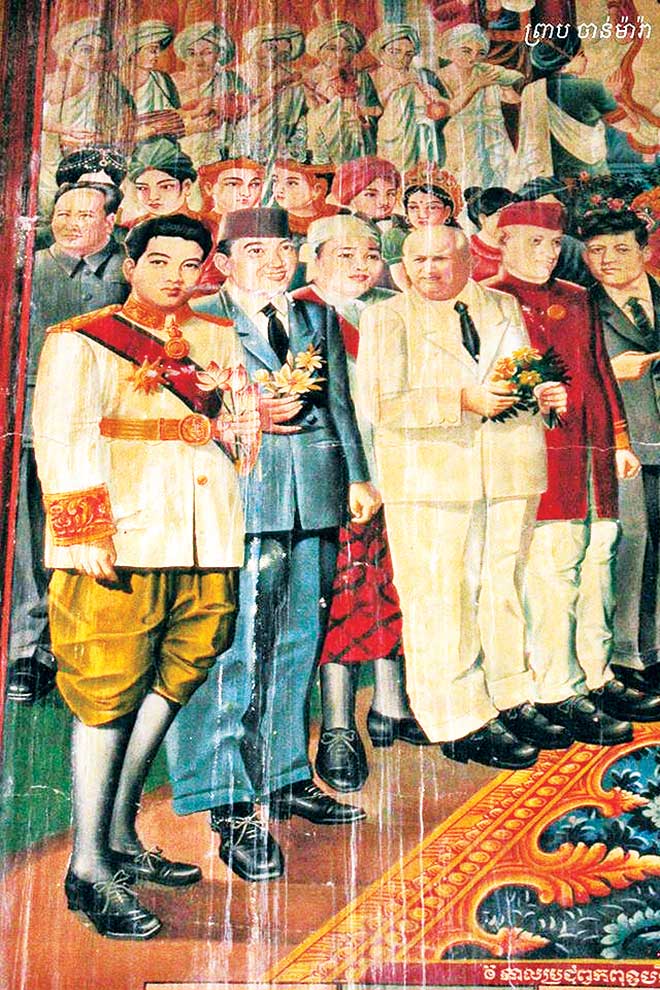 The mural of the cremation featuring young King Sihanouk and world leaders.Photo supplied

Sombo Manara, another prominent Cambodian historian, sees the murals as representative of the Kingdom’s foreign affairs in the 1950s. Although he does not know who painted or commissioned them, to him it is clear that that the person was faithful to King Sihanouk’s policies.

“The King tried to keep the country neutral and peaceful by keeping equal ties with all foreign powers,” he said. “As we can see, there are almost all forms of ideology in the painting. Even the communists and the liberals were seen together, receiving blessing from Buddha.”

Danielle and Dominique Guéret, an anthropologist couple who have documented the country’s monastic temples, called the overall architecture “nothing original” but highlighted the paintings, both religious and historical, as standing apart.

“This mural was created with the help of several photos, as these leaders were never in the same place in Cambodia. The loss of [the mural] is ‘historical’ . . . it is also a loss of the [sentimental] attachment on the part of the loyalists towards Sihanouk,” they wrote by email.

No easy fix
When approached by Post Weekend at the pagoda this week, abbot Sok declined to answer questions and instructed the pagoda’s monks to prevent reporters from speaking with the laypeople. But according to Chan Thorn, 56, a builder and repairman who had overseen repairs to the temple before it was torn down, the reason for the demolition was its fragility. 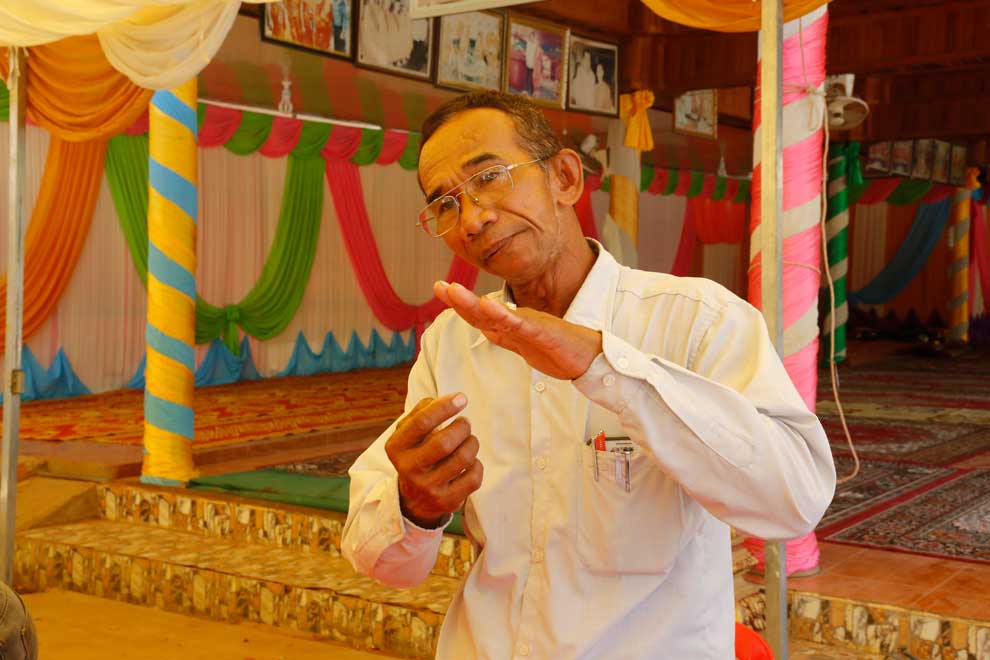 Chan Thorn, who was responsible for repairs of the now-destroyed vihear. Heng Chivoan

Thorn said that at first Sok only wanted to fix the roof. While doing so, however, workers discovered cracks on the walls and columns and, afraid that the temple would soon collapse, the abbot decided to knock it down.

“There were hundreds of bats living in the temple,” Thorn said. “They came in through the holes in the roof, and their guano weakened the structure of the temple.”

Thorn said that although the structure had been a heritage site since 2007, there had not been any official ceremony or documents from the Ministry of Culture and Fine Arts, and the abbot and the local people did not realise its status until it was demolished and the news went viral.

He added that Sok should not be blamed since the demolition was to prevent an accident.

His account, however, differs from that of the provincial Culture Department. Sorphorn, the Kampong Thom deputy Culture Department head, claimed that inspections had been made by his working group suggesting that the structure of the temple, with the exception of the roof, was “still pretty sturdy”. However, he admitted officials could not inspect the structure often because they were busy with other tasks. 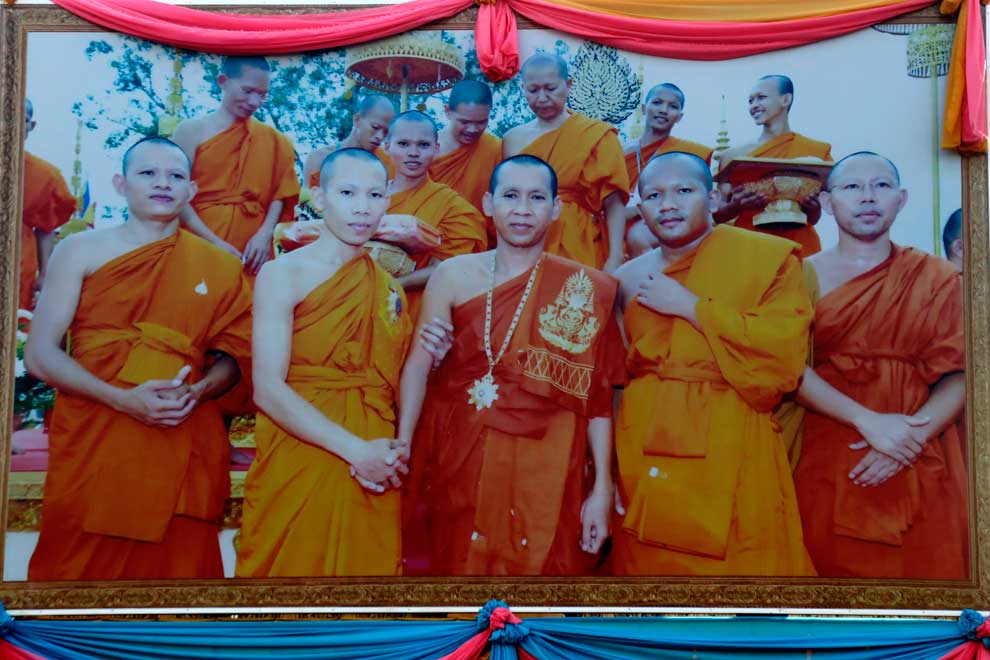 “But one day before the temple was destroyed, we went to see the abbot and asked him not to destroy the temple,” Sorphorn said. “He seemed to agree with us, but the next day it disappeared.”

On Wednesday, Sok released a letter of apology for ordering the demolition of the temple. In the letter, posted on Facebook, he asked for the public’s understanding.

“After being informed that the monastic temple was a listed national heritage [site] . . . I was deeply regret and gravely upset, for I should not have been so careless and ignored the value of the national heritage,” he wrote.

Sok also blamed himself for not waiting for advice from the ministry. He asked the people and authorities to let “bygones be bygones” and promised to make up for what happened by putting his efforts towards preserving existing national heritage.

As of yesterday, it was unclear what legal measures, if any, would be taken against the abbot. When contacted on Wednesday, Culture Ministry spokesman Heu Virak told Post Weekend that his ministry, which is responsible for maintaining and preserving national heritage, would meet with the Ministry of Cult and Religion to decide how to deal with Sok.

Article 69 of the constitution states that “the state has the obligation to preserve and protect” historical sites, and says those who breach the clause should be “severely punished”, although such punishments are not specified.
“This is a very important issue, and the Ministry of Culture cannot make the decision alone,” he said on Wednesday. “We expect the joint decision to be made in a few days.” 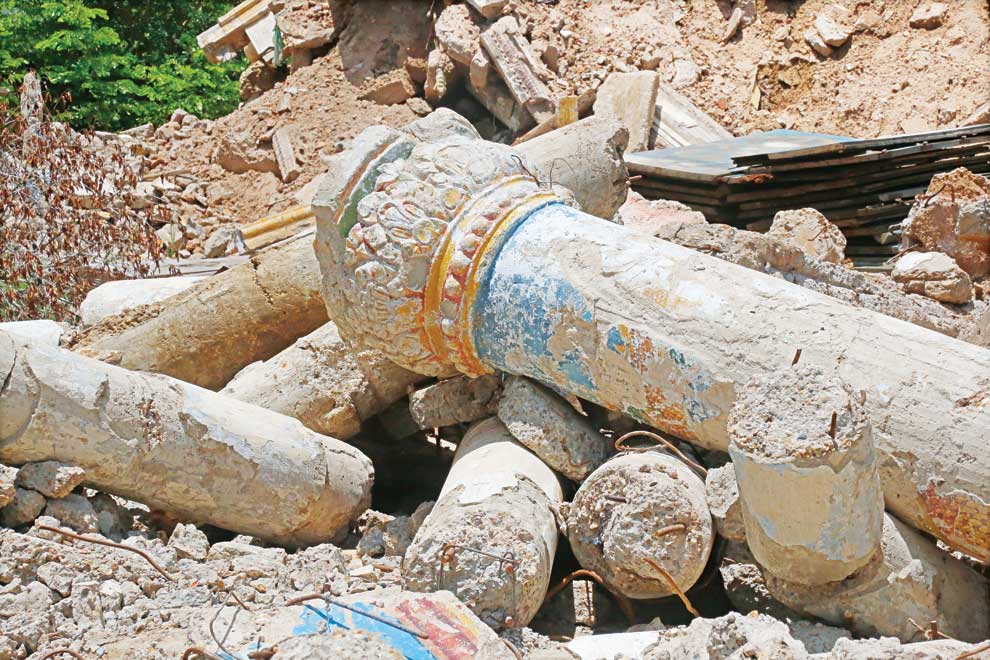 A column in the rubble of the destroyed vihear. Heng Chivoan

The Ministry of Cult and Religion could not be reached yesterday for further details.

Acccording to provincial culture official Sorphorn, the incident at Entri Sam Virak should serve as a lesson for future protection of the country’s inventory of heritage. In Kampong Thom alone, there are 440 such sites.

However, Dominique and Danielle Guéret expressed concern that many significant religious buildings fall under the radar.

“Many other sanctuaries have disappeared without being declared national heritage structures, but nonetheless, having a heritage value,” they wrote.

The historian Tranet suggested the ministry set up clear regulations and penalties for such destruction. Meanwhile, he called for legal action against the abbot.

“If our ancestors had been easy on destroying what their ancestors built like that, we would not have Angkor Wat right now,” Tranet said.